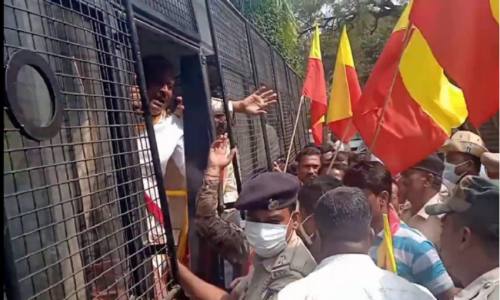 The demand for the banning of Maharashtra Ekikaran Samiti (MES) does not seem to relent as the pro-Kannada organisations have continued to stage protests. On Tuesday, December 28th also, several members of Karnataka Rakshana Vedike took out a protest rally and tried to picket the office of Deputy Commissioner in support of their demand.

The protestors marched towards the DC's Office by carrying Kannada flags and raising slogans against the MES. The Protestors accused the BJP Government of delaying in meeting their demand of banning MES in the State

The large presence of police however foiled their bid and detained the protestors. They were later released.